Apple vs. Microsoft – The Tale of Two Techs

In a February 7, 2012 interview, Henry Blodget of the Business Insider was quoted as saying:

Apple’s iPhone business alone is now bigger than Microsoft.  Not Windows.  Not Office.  Microsoft.  Think about that.  The iPhone did not exist five years ago.  And now it’s bigger than a company that, 15 years ago, was dragged into court and threatened with forcible break-up because it had amassed an unassailable and unthinkably profitable monopoly…  In the December quarter, Apple’s iPhone business generated $24.4 billion of revenue.  Microsoft’s whole company, meanwhile, from Windows to Office to servers to XBox, generated $20.9 billion.

A quick look at a 5 year chart comparing the stock price of Apple (AAPL) vs. Microsoft (MSFT) reveals the tale of two techs.  One going nowhere, the other shooting to the moon. 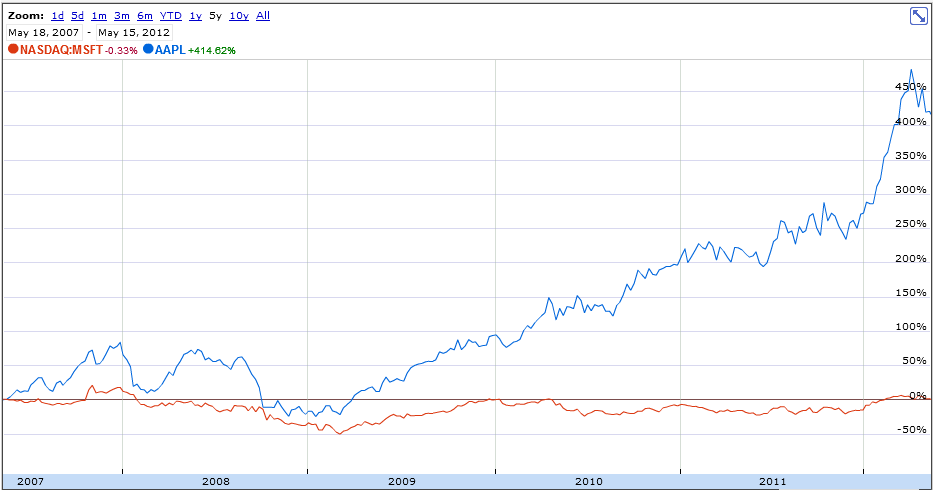 Now, some decry the fact that AAPL share price has been taking a beating lately, but it isn’t hard to discern that overall, the company has a solid brand, solid financial position, and a bright future ahead.

FULL DISCLOSURE:  We are long AAPL at the time of this writing.

FULL PERSONAL DISCLOSURE:  I recently purchased an iPad 3rd generation and am undergoing positive life-change as a result.