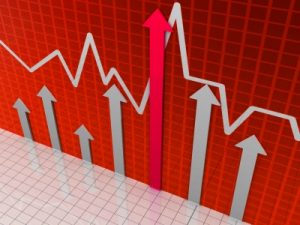 Despite flirting with new records, markets weren’t able to hold on to gains last week and closed mixed after comments about interest rates were made by Federal Reserve Chair Janet Yellen. For the week, the S&P 500 gained 0.16%, the Dow lost 0.22%, and the NASDAQ gained 0.81%.[1]

Yellen gave a speech Friday that underlined her determination to raise interest rates this year as long as the economic recovery continues. Though she didn’t really say anything new, her comments underscore the fact that the Fed is committed to returning to normal monetary policy as soon as economists feel the economy can handle it. She also emphasized that interest rate hikes will be done gradually over a period of years, which should help cushion the blow to financial markets.[2]

Could Yellen have been floating the idea to see how markets will react to a more aggressive stance on interest rates? Possibly. If so, the next few weeks could give us an idea of how investors will treat the news. Her speech also highlights her optimism about economic growth despite some weak reports in recent weeks.

Last week’s jobs report showed that the number of Americans filing new claims for unemployment benefits rose slightly to 274,000. However, the four-week moving average, a less volatile indicator, fell to the lowest level since April 2000.[3] Outside of the energy sector, which has lost thousands of jobs due to low oil prices, layoffs in the U.S. have been minimal in the past months.

Though jobless claims (a good indicator of layoffs) rose slightly, claims from Americans renewing unemployment applications fell to the lowest level since November 2000.[4] Currently, the overall trend is one of steady improvement in the labor market, which we hope will translate into higher consumer confidence and spending this summer.

Core inflation data also supports a move to higher interest rates later this year. The Fed has the “dual mandate” of keeping unemployment low and inflation stable and had tied monetary policy changes to two numbers: a headline unemployment rate of 5.2-5.6% and annual inflation of 2.0%.[5] While the employment goal has been reached, the inflation target has been more elusive.

While some economists have worried about too-low inflation, the latest Consumer Price Index (CPI) figures suggest that core CPI, the number most used by economists, rose 1.8% in the last year. This stable rise, just under the Fed’s target, indicates that price pressures remain stable but are moving higher and closer to the 2.0% goal.[6]

Looking ahead, analysts will be closely watching Friday’s second reading of the Q1 Gross Domestic Product (GDP) report. Unfortunately, the news isn’t expected to be good, and many economists expect to see that the economy shrank amid harsh winter weather and dock strikes. However, there’s considerable hope that the economy is rebounding in the second quarter (much as it did last year).[7] 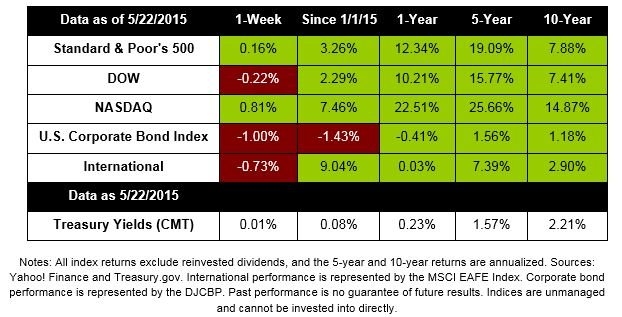 Factory growth slows for second month. Growth in the U.S. manufacturing sector, a major driver of economic activity, slowed down for another month in May. New orders increased at a very slow pace, indicating that next month might be slow as well.[8]

U.S. gas prices at six-year low. Just in time for the summer driving season, pump prices across the nation are at a multi-year low. According to AAA, average gas prices were just $2.74 across the country. Hopefully, fuel savings will result in greater consumer spending.[9]

Greece can’t pay its June bills. Greek leaders announced that they won’t be able to make debt repayments next month unless they receive another round of rescue funding. Despite months of negotiation, it’s unclear whether a deal can be reached that would prevent Greek insolvency.[10]

April housing starts surge. Groundbreaking and permits for new homes spiked in April to the highest level in over seven years, indicating that homebuilders were confident about future sales. March numbers were also revised upward in a very hopeful sign for the housing market.[11] 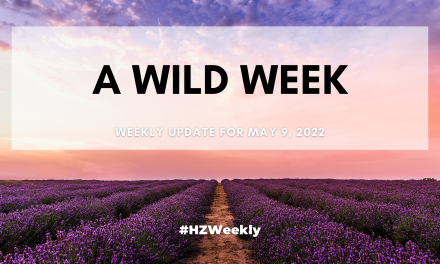 Are You Mentally Prepared for Retirement? How to thrive before and after the transition 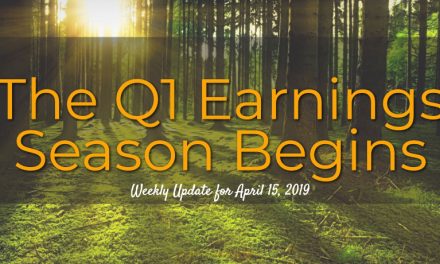