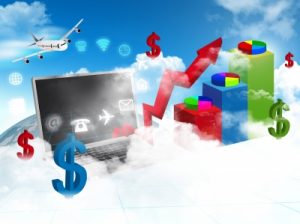 After some market stumbles in recent weeks that erased earlier gains, stocks ended about where they started at the beginning of the quarter. However, broad economic gains means that solid fundamentals could contribute to market upside later this year. For the quarter, the S&P 500 gained 0.62%, the Dow grew 1.29%, and the Nasdaq added 1.93%.[1. https://www.google.com/finance?chdnp=1&chdd=0&chds=0&chdv=1&chvs=Linear&chdeh=0&chfdeh=0&chdet=1412107200000&chddm=25024&chls=IntervalBasedLine&cmpto=INDEXDJX:.DJI;INDEXSP:.INX&cmptdms=0;0&q=INDEXNASDAQ:.IXIC&ntsp=1&ei=vjYxVLCZHIOVwQOehoHwAg]

What are some of the factors that contributed to strong market performance in Q3?

After a very slow start to the year, economic growth rebounded in the second quarter, giving investors confidence that the economic recovery was still healthy. The latest estimate of Q2 gross domestic product (GDP) growth showed that the economy grew 4.6%;[2. http://www.bea.gov/newsreleases/national/gdp/gdpnewsrelease.htm] while official Q3 numbers aren’t out yet, some estimates indicate that the economy may have slowed slightly in the past three months, but could still clock in a healthy 3.0% gain.[3. http://www.cnbc.com/id/102037335]

The labor market made great strides last quarter, adding 671,000 new jobs in the past three months. In September, hiring accelerated and the jobless rate reached a six-year low of 5.9%.[4. .http://www.bls.gov/news.release/empsit.nr0.htm] To compare: In September of 2013, the unemployment rate stood at 7.2%, and the labor market added just 430,000 jobs.[5. http://www.bls.gov/news.release/archives/empsit_10222013.pdf] On the other hand, wage growth seems to be frozen, indicating that many Americans are failing to see income gains that could lead to greater consumer spending.[6. http://www.reuters.com/finance/economy]

Strong corporate profits coming off of the second quarter helped boost markets by showing that demand is improving across many sectors. Even better, Q3 guidance was modestly higher, indicating that corporate leaders felt more positive about their chances going into the second half of the year.[7. http://www.zacks.com/commentary/33730/bulk-of-q2-earnings-now-behind-us] We’ll know whether their optimism was merited once Q3 earnings reports are released.

Geopolitical issues continue to drag on market performance as the situation in Ukraine continues to simmer and parts of the Middle East roil with violence. Since these areas play key roles in global petroleum and natural gas production, supply disruptions could have a serious impact on fuel prices.

The Federal Reserve was a big player last quarter, and its monetary policy decisions will likely impact market activities in the coming weeks and months. The current round of bond purchases are scheduled to end in October, bringing the Fed’s quantitative easing programs to a halt.[8. http://www.cnbc.com/id/102009066] Investors are now turning their attention to the question of when the Fed will begin raising interest rates, and speculations will likely lead to further market volatility.

Markets have been running high, with multiple indexes reaching new records in the third quarter, which can sometimes presage a pullback as investors pause to take stock of the market environment. Is a pullback certain? Definitely not. Bottom line: Domestic economic fundamentals are strong going into the final three months of the year. As earnings start trickling in, solid performances could translate into further market upside. As always, we recommend staying focused on long-term goals instead of short-term volatility and market performance. 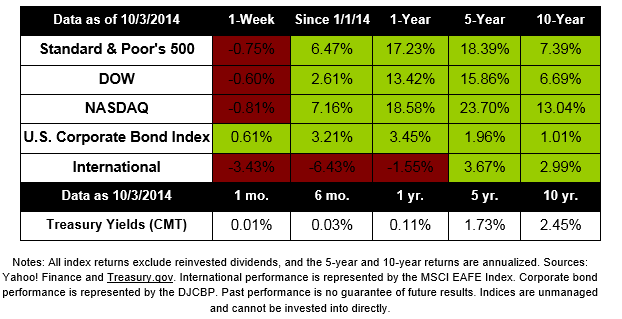 U.S. auto sales rise. After a sharp increase in August, sales of cars and light trucks rose on big Labor Day discounts in September. While the higher trend is good news for the industry, price cuts and incentives will chip away at company profits.[9. http://www.cnbc.com/id/102049247]

Trade gap shrinks on low oil prices. The gap between imports and exports dropped in August as lower oil prices caused the overall cost of imports to fall. This is good news for consumer spending as lower import costs puts dollars in consumers’ wallets.[10. http://wsj-us.econoday.com/byshoweventfull.asp?fid=461195&cust=wsj-us&year=2014&lid=0&prev=/byweek.asp#top]

Factory orders drop in August. As expected, orders for manufactured goods plummeted 10% in August, erasing July gains. The July jump was driven by a one-off surge in aircrafts; stripping out the volatile transportation category, core orders were down slightly by 0.1%.[11. http://www.cnbc.com/id/102053585]

Consumer confidence drops sharply in September. After hitting a seven-year high in August, confidence among American consumers hit a speed bump as they worried about jobs and income growth. However, consumers were still upbeat about the future, hopefully indicating that consumer spending won’t take a hit in the months to come.[12. http://www.usatoday.com/story/money/business/2014/09/30/consumer-confidence-september/16453621/] 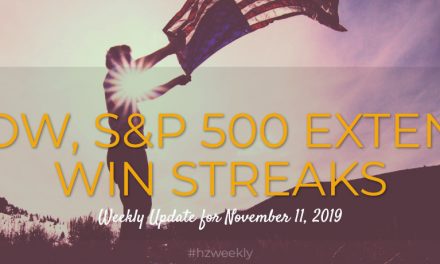 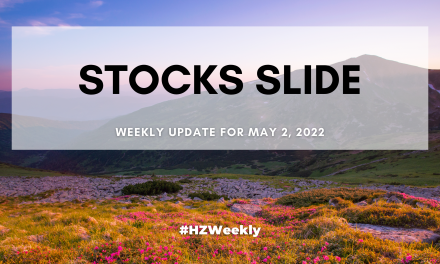