The second Gross Domestic Product estimate came out Tuesday and showed revised growth of 3.9% in the third quarter, significantly higher than the original 3.5% estimate. The second release is based on more complete data and reflects increased growth in multiple sectors of the economy.[2. http://www.bea.gov/newsreleases/national/gdp/gdpnewsrelease.htm] This is good news for the fourth quarter if the growth can be maintained.

The critical holiday shopping season kicked off with a bang, with retailers starting their Black Friday deals as early as Wednesday or Thursday. Early estimates suggest that 55% of consumers shopped online or in stores over the Thanksgiving weekend and spent an average of $380.95 per person.[3. https://nrf.com/media/press-releases/early-promotions-online-shopping-and-improving-economy-changing-the-face-of]

Since the holiday season accounts for about 20% of total 2014 retail business, retailers are understandably anxious to keep the ball rolling. The CEO of Macy’s, one of the nation’s largest retailers, is cautiously optimistic about the holiday season as consumers take advantage of a burlier economy to unleash pent-up demand.[4. http://www.cnbc.com/id/102223845?trknav=homestack:topnews:8] Can the strong retail trend continue? Let’s take a look at some of the factors that may affect holiday shopping:

Petroleum prices are still falling precipitously; last week, crude oil fell to its lowest price since 2009 when the Organization of Petroleum Exporting Nations (OPEC) declined to cut production.[5. http://www.foxnews.com/world/2014/11/29/opec-keeps-oil-output-steady-despite-falling-prices/] In a few short months, oil has fallen from $100/barrel to $70/barrel, and it doesn’t appear that we’ve seen the bottom yet.[6. http://www.washingtonpost.com/blogs/wonkblog/wp/2014/11/28/a-simple-guide-to-the-sudden-collapse-in-oil-prices/] Gas prices have followed oil, and a nationwide drop in gas prices are leaving consumers with more money at the holidays.

Consumer confidence, an indicator of how optimistic Americans are about their current and future financial prospects, reached its highest level in seven years as low gas prices and a strong job market boosted spirits.[7. http://www.bloomberg.com/news/2014-11-26/consumer-sentiment-in-u-s-rises-to-highest-in-seven-years-1-.html] Though the correlation isn’t perfect, confidence readings are often seen as a gauge of future spending.

The latest data shows that consumer spending rebounded modestly in October after falling in September. However, the October data may not yet show the effects of the steep decline in gas prices, meaning we may see a bigger jump in November.[8. http://www.foxbusiness.com/industries/2014/11/26/consumer-spending-rebounds-income-rises-modestly/] All told, the fundamentals are in place for a strong holiday shopping season, which will hopefully spur additional economic growth. 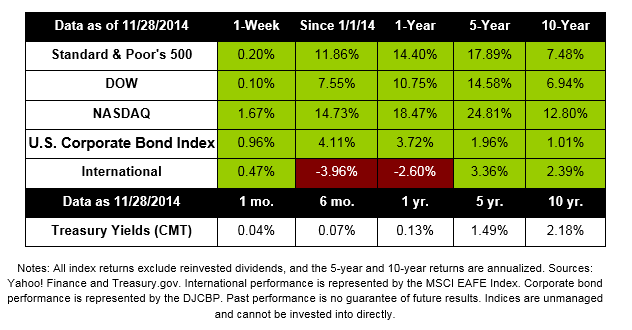 New homes sales slow.  Sales of new homes edged up in October, but the slow pace of growth underlines how slow housing demand is. Taken together with last week’s existing home sales, analysts believe that the sector is moving into a more stable  growth phase.[10. http://www.forbes.com/sites/erincarlyle/2014/11/26/new-home-sales-sluggish-in-october-0-7-increase-reflects-new-normal/]

Jobless claims reach near three-month high. After weeks of improvement, weekly claims for new unemployment benefits reached the highest level since early September. Though weekly results are volatile, the number could indicate that businesses are cooling off their hiring near the end of the year.[11. http://www.bloomberg.com/news/2014-11-26/jobless-claims-in-u-s-increase-to-almost-three-month-high.html]