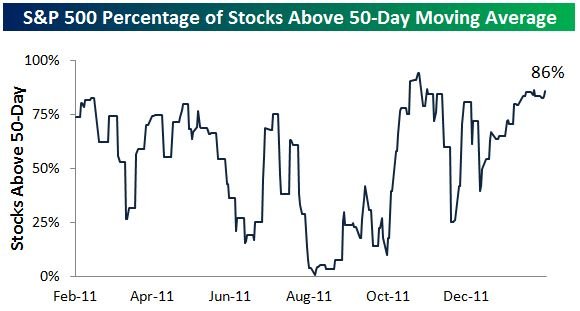 86% of stocks in the S&P 500 are now trading above their 50-day moving average. This is a high reading but not quite as high as October of last year.

So far, last year’s losers are this year’s winners. The 3 sectors that were down in 2011 rank in the top 3 so far this year: Financials, Materials, and Industrials. The 2 best sectors of 2011 are down so far in 2012: Utilities and Consumer Staples.

Volatility has calmed down once again. Through Thursday, the S&P 500 has had only two 1% days for the year, and both were positive. The biggest down day for the year was only -0.57%. This is a nice change from last October when 15 of the 21 trading days were 1% or more moves. Although much of the 2nd half of 2011 seemed very volatile this is still nothing compared to the 50 day stretch in 2008 where the market averaged a daily change of up or down 4.02%. [Source: Bespoke]

We are well into this quarter’s earnings season. One important indicator of how well companies are doing is the “beat rate”. The beat rate tells us how many companies have reported earnings results that “beat” analyst estimates. Through yesterday 60.7% of companies beat earnings estimates.

This morning’s jobs report came in well above expectations. The US economy added 243,000 jobs during January which was 103,000 more than the expected 140,000 jobs. The market reacted very favorably today as this was the biggest beat versus expectations since the December 2009 report. [Source: Bespoke]

The unemployment rate dropped to 8.3%, the lowest level since February 2009.

Today’s report was the best since the start of the recovery, but we’ve still got along way to go. Unemployment is still far above where it should be. Creating more jobs will take time, but the good news is we are moving in the right direction.

Mortgage rates have fallen to yet another all-time record low. Freddie-Mac reported that a 30-year fixed rate mortgage averaged 3.87% with an average 0.8 point for the week ending February 2, 2012, down from last week when it averaged 3.98%. Last year at this time, the 30-year fixed rate averaged 4.81 percent.  This is the lowest 30 year fixed rate since Freddie Mac started tracking rates in 1971.

So, what historically happens in the stock market during the month of February?

If you are a stock investor, let’s hope history doesn’t repeat itself this February:)

However, if you believe that history repeats, and you want to trade the February seasonality patterns, here’s what you want to do: