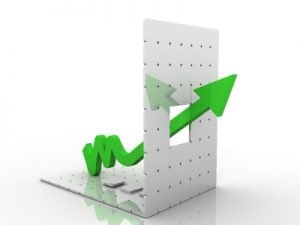 What are some of the factors that contributed to strong market performance in Q2?

Economic fundamentals were solid. Despite some gloomy first quarter Gross Domestic Product (GDP) results showing the economy contracted 2.9%, it appears that underlying fundamentals are returning to trend following the chilly winter. Retail and vehicle sales grew as consumers unlimbered their wallets.[3. http://www.usatoday.com/story/money/business/2014/06/12/may-retail-sales/10350353/http://www.freep.com/article/20140701/BUSINESS0104/307010022/june-auto-sales] Manufacturing also picked up significantly after the winter slowdown, supporting the belief that the sector, which contributes 12.5% to GDP, is rebounding strongly.[4. http://www.nam.org/Statistics-And-Data/Facts-About-Manufacturing/Landing.aspx , http://www.cnbc.com/id/101762241]

The employment picture is much brighter. The labor market hit an important psychological milestone by regaining all of the 8.7 million jobs lost in the recession.[5. http://www.usatoday.com/story/money/business/2014/06/06/may-jobs-report/10037173/] While demographic shifts and labor market growth mean that we haven’t yet hit full employment, job growth could be picking up speed. The June employment situation report showed the economy created 288,000 new jobs and the unemployment rate dropped to 6.1%.[6. http://www.cnbc.com/id/101810923] All told, roughly 800,000 new jobs were created last quarter, which is great news.[7. http://www.bls.gov/news.release/empsit.nr0.htm , http://www.forbes.com/sites/maggiemcgrath/2014/06/06/jobs-report-u-s-economy-added-217k-jobs-in-may-unemployment-remains-unchanged-at-6-3/]

The Federal Reserve has continued to express optimism about the economic recovery and is committed to wrapping up quantitative easing programs by this Fall.[8. http://www.marketwatch.com/story/yellen-stays-upbeat-but-is-watching-housing-2014-05-07 ] Much of the bull market we’ve seen for the last couple of years can be attributed to the Fed’s easy money policies and its commitment to supporting economic growth. Now that the country is finally on better footing, investors are taking comfort from the Fed’s readiness to take the training wheels off the economy and return to normal monetary policy.

Geopolitical issues are on the radar as the security situation continues to deteriorate in Iraq and the crisis in Ukraine still simmers. Ukraine and Iraq play key roles in the natural gas and oil industries, respectively, and supply disruptions – or even just the threat of disruptions – could drive up prices and make investors skittish.

Rising food and energy prices may start to be felt in consumer spending.[9.  http://www.usatoday.com/story/money/business/2014/06/17/consumer-prices-may/10642375/] If Americans are taking hits to their pocketbooks, they may be less willing to spend, which could drag on the economy and financial markets.

Investor optimism is also very high, which can sometimes presage a market pullback as investors take profits and wait for better news. After flirting with the top for days, the Dow finally broke 17,000 last week for the first time in its 118-year history.[10.  http://www.cnbc.com/id/101810923] Though we don’t put a lot of faith in technical indicators, 17,000 is a big psychological number and investors may become more cautious on the other side.

What does this mean for future market performance? Hard to say. Economic fundamentals going into the third quarter are strong, and if the earnings picture is bright, stocks could see some further upside. However, we can expect more volatility and possibly even a correction in the months to come. As always, it’s important to stay focused on long-term goals instead of short-term market performance. 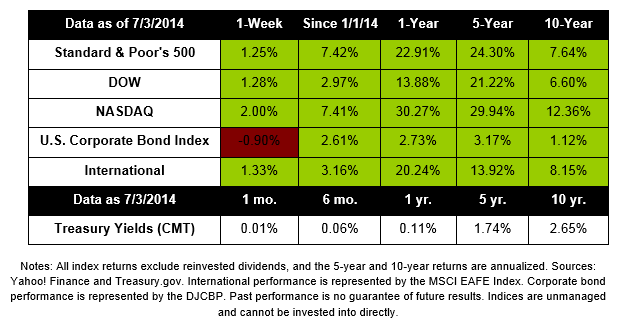 Vehicle sales accelerate in June. Sales of automobiles spiked unexpectedly last month, reaching an annualized rate of 16.98 million units. This is good news for the economy because it indicates that consumers are willing to purchase big-ticket items.[11. http://www.businessinsider.com/us-auto-sales-june-2014-2014-7 ]

ECB unlikely to buy bonds. While the European Central Bank has committed to quantitative easing to boost stagnant growth in Europe, the organization will likely stop short of taking on the Federal Reserve-style bond purchases.[13. http://www.reuters.com/article/2014/07/05/us-ecb-lautenschlaeger-idUSKBN0FA0AS20140705]