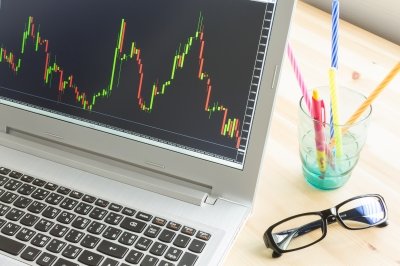 Though the headwinds that roiled markets since the beginning of the year remain, investors found their footing last week and closed out a positive week for the first time in 2016. What caused the uptick in investor sentiment?

Oil prices rebounded to settle at their highest close since the first week of January. While oil is likely to remain volatile, a rally helped investors settle their nerves.[ii] Markets also got some help from the European Central Bank, which hinted at further stimulus measures to boost the European economy.[iii]

We’re also in the early stages of U.S. earnings season, which is stealing attention away from China and oil prices. So far, with 73 members of the S&P 500 reporting in, earnings are already up 1.4% on 0.8% higher revenues. While those aren’t stellar results, 71.2% of reporting firms beat earnings estimates, suggesting that corporate leaders set expectations low enough to be able to beat them amid challenging conditions.[iv]

However, the overall fourth-quarter earnings picture is likely to be less rosy. U.S. companies are struggling to achieve growth goals in a shaky global business environment, and analysts expect overall Q4 earnings to come in below Q4 2014 levels.[v] What do these challenges spell for investors? Volatility. While we can’t predict the future, we think that the first few months of 2016 are likely to be rocky for equities.

Looking ahead, the Federal Reserve’s January meeting will take center stage this week, though economists expect them to hold pat on interest rates. Though it’s possible that Fed economists may vote to raise rates further, a raft of weak data and ongoing concerns about global growth are likely to trigger a wait-and-see approach.

The first look at Q4 economic growth will be released on Friday, and it’s likely to show weak growth in the last three months of the year.[vi] Earnings season will also continue, and investors will be looking forward to reports from heavy-hitters like Apple [AAPL], Facebook [FB], and Ford [F].[vii]

Will stocks be able to hold the gains and move out of the pullback? We’ll see. The news has been negative for several weeks, and it’s possible that investors are poised to jump on any positive surprises. 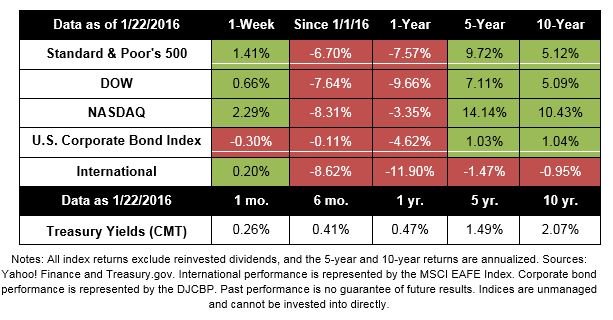 Existing home sales surge. Home resales skyrocketed in December by a record 14.7%, boosted by warmer weather and a stronger labor market that is supporting household formation.[ix]

Winter storm Jonas slams East Coast. A blizzard covered large swathes of the East Coast in historic levels of snow. The economic disruption of short-lived storms are usually minor, and Jonas may be a win for grocery stores, though it could be a loss for hourly workers.[xi] 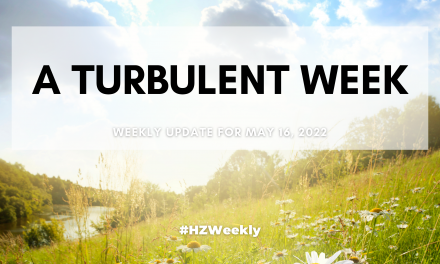